The Quartz Countertop: Everything You Need To Know 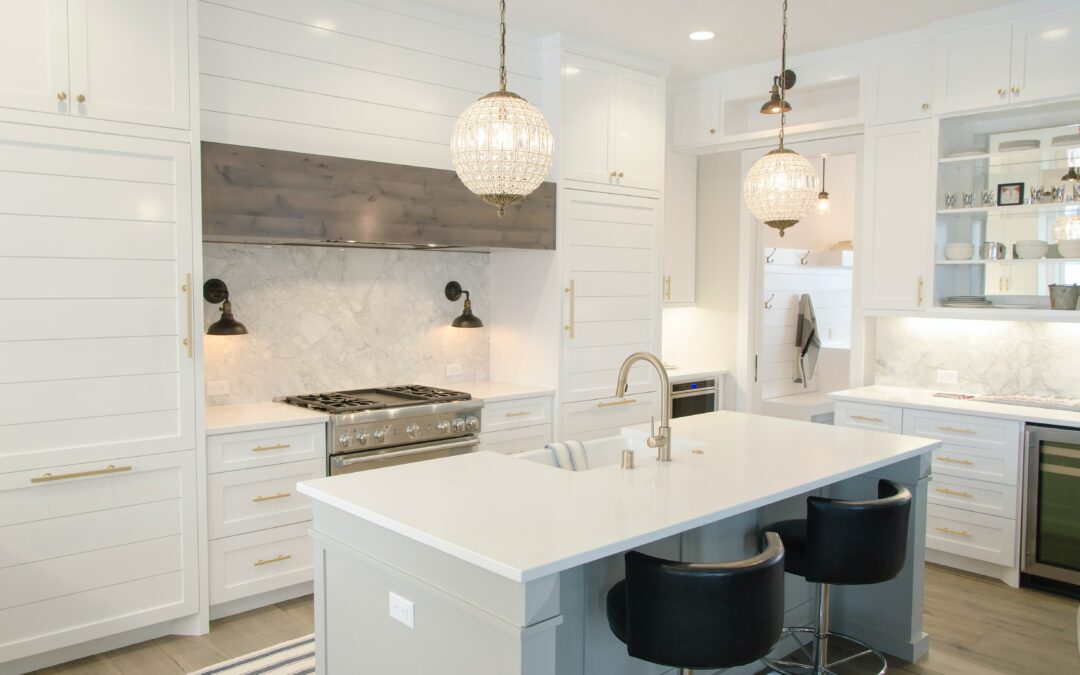 Quartz countertops, otherwise known as “engineered stone worktops”, are a timeless staple for any kitchen, bathroom or commercial business space.

Not only do they add a sense of luxury, but they also have a reputation for being hard-wearing, stain resistant and extremely versatile.

If you’re considering a quartz worktop for your home or business, it’s wise to conduct research before committing to purchase.

So, to give you a helping hand, here’s everything you need to know about quartz countertops.

If you’ve been thinking about buying a quartz countertop, you may be wondering, what quartz actually is!

Quartz is an abundant mineral that can be naturally found on the earth’s surface and within the earth’s crust. It is composed of two key chemical elements – oxygen and silicon, which form together to make silica or silicon dioxide. This combination results in a solid, non porous, durable material that is a great alternative to marble and granite worktops.

The term “quartz” comes from “quarz”, an old German word that loosely translates as “hard”.

How are Quartz Worktops Made?

When we use quartz to form worktops, we grind down the natural quartz mineral and bond it with resin under high heat so that it forms a solid block. During this process, we can add pigment to give the worktop our desired colour.

Natural quartz is an igneous rock, which means that it is formed from the cooling of magma (like granite).

Igneous rocks are known to be especially hard due to the interlocking crystalline structures which form as the magma cools. And when it comes to hard rocks, quartz trumps them all!

Ranking 7 on the Mohs scale, quartz is notably harder than both granite (rated 6) and marble (rated 3), making it ideal for your kitchen or bathroom.

In spite of quartz’s hardness and strength, it can still be cut into perfectly formed slabs. You just need to ensure that you enlist the help of an experienced company that delivers quality craftsmanship.

At Marble Supreme, our experts use specialist stone-cutting equipment and techniques to cut the quartz to the desired thickness. If this is not done by a professional, you run the risk of the quartz chipping or cracking.

Did you know that Italy is the home of Quartz Worktops?

In 1963, Breton, an Italian company, were the first to create quartz worktops, under the product name Bretonstone. Since then, the company has licensed out its patented technology to companies around the world.

Why is Quartz a good choice of material for worktops?

So, why do we use engineered quartz stone for worktops?

Aside from being both stylish and hard-wearing, quartz is a great choice for kitchen counters due to its heat-resistant properties.

As household fires are more likely to start in the kitchen, using quartz reduces the likelihood of a small fire spreading since it is more resistant to flames.

With that being said, it’s important to note that heat resistant and heat proof are not the same thing.

Due to the resin element, quartz worktops are still susceptible to heat damage so it’s not advisable to place hot pots or pans onto the surface. Resin can generally only withstand temperatures up to 150 degrees, so anything hotter will likely cause irreversible damage.

Alternatives to Quartz and their Properties

When it comes to quartz worktops, there are three popular alternatives: marble, granite and quartzite.

Unlike quartz, marble and granite worktops are created by using natural stone straight from the quarry. Both appear visually similar however their properties vary somewhat.

Marble is an attractive metamorphic stone that is created when sedimentary rocks are formed together and exposed to intense force and heat. Often chosen for its elegant appearance, it can really make a statement when used in any kitchen or bathroom.

Unlike granite and quartz, marble can be fragile so should not be used as a surface for cutting. It is also more vulnerable to staining due to its high porosity.

Granite is an igneous rock that is formed over millions of years from the process of heating and cooling magma. Much like quartz, it is a hard, durable material that is not easily discoloured. In spite of this, both marble and granite need sealing to keep them in prime condition.

Lastly, we have quartzite. Quartzite combines granite, quartz, marble and dolomite, making it a perfect blend of all our stones. Quartzite benefits from the strength of granite, the opulence of marble and has a beautiful translucent finish due to the blend of quartz and dolomite.

Despite being made from natural stone, quartzite is slightly less durable than quartz. What’s more, when it comes to colours, you are limited to the natural pigments found in the quartz sandstone.

How to Care for your Quartz Worktop

Fortunately, quartz counters are much easier to keep clean than other common surface types such as marble and wood.

Due to the low porosity of quartz, it is harder for liquids to penetrate through the surface layer, meaning quartz worktops do not need to be sealed.

In spite of this, quartz worktops will still need to be cleaned from time to time and it’s best to tackle spillages as and when they happen.

To keep your quartz countertop in tip-top condition, we recommend using a simple dish soap and microfibre cloth. Anything stronger will be too harsh and may damage the counter.

If you do opt for a cleaning spray or solution, make sure that it is specifically formulated to be used on quartz countertops. Using the wrong product could lead to discolouration and faster wear.

As we mentioned earlier, the great thing about quartz worktops is that you can add a whole range of different pigments during the bonding process!

From royal grey to emerald green and intense white, there is a huge array of shades to choose from.

When it comes to kitchen and bathroom countertops, the appearance of the quartz itself is very much dependent on how we grind the material. A more finely ground quartz will result in a smoother surface, whereas a coarser blend will give the counter a speckled or flecked finish.

Because of this manufacturing process, a quartz worktop can be made to imitate the look of natural stone such as Marble and Granite!

If you’re curious to find out about the patterns and colours available, why not take a look at our quartz swatches?

If you’re going to invest in a quality quartz countertop, make sure you’re buying the real deal!

So, how do you spot a fake quartz countertop?

Previously we spoke about the low porosity of quartz countertops which makes them low maintenance and resistant to stains. So, if your counter is marking easily and you’re finding it difficult to clean, there is a good chance that it’s a counterfeit.

Another way to spot a fake quartz countertop is the presence of blotches and concentrated dark patches. This indicates resin pooling which is caused by using too much resin in the mix which gives the worktop a patchy and unsightly appearance.

How much do Quartz Countertops Cost?

When it comes to cost, the amount you pay for your quartz worktop will very much depend on the size, depth, finish and installation. Be wary of suppliers offering fixed prices or cheap deals as this may be an indication of poor workmanship or hidden costs that won’t be disclosed until further down the line.

To give you an accurate estimation, reputable suppliers will ask for as much information as possible so that they can get to know your requirements and be transparent about pricing.

Other Common Uses for Quartz

Natural quartz is an incredibly versatile material and comes in a variety of forms. From quartz crystals used in jewellery making, to quartz sand used in metal casting and ceramics, there are so many different uses for it.

Rarely, do we use quartz in its purest form. In order to make it fit for purpose, it often needs to be blended with other materials.

When it comes to kitchen and bathroom countertops, the appearance of the quartz is very much dependent on how we grind the material. A more finely ground quartz will result in a smoother surface, whereas a coarser blend will give the counter a speckled or flecked finish.

Are there any Drawbacks to Quartz Counters?

There are only a small number of drawbacks to quartz stone. Nonetheless, it is important to take any limitations into consideration before committing to a quartz worktop.

Firstly, if exposed to too much natural sunlight, quartz stone can start to fade in colour. So, if your kitchen space gets a lot of sun during the day, you might be better suited to other options such as quartzite or granite worktops.

Another thing to take into account when considering quartz for your counter is the worktop seams.

All stone countertops have seams, however, these can be more visible if you choose a quartz design that is speckled or lighter in colour.

To reduce the visibility of your quartz counter seams, opt for a darker shade and enlist the help of a professional. Experienced fitters will be able to strategically place your quartz counters so that the seams are less noticeable.

Quartz Countertops in Bristol and the Southwest

Are you looking for a reliable quartz worktop supplier based in Bristol or the South West?

At Marble Supreme, we have a wealth of experience crafting the highest quality quartz worktops that will add an air of elegance and sophistication to your kitchen or bathroom.

If you’d like to come in and find out all about the range of quartz worktops that we have on offer, why not visit our Kingswood showroom?

Pop into our store between Monday and Friday or book a Saturday appointment with one of our friendly showroom staff. More information about our showroom opening hours can be found here.

Deciding between Quartz, Granite and Marble

Still can’t decide between quartz, granite and marble? Take a look at our worktop materials page to discover even more information about our stone types!